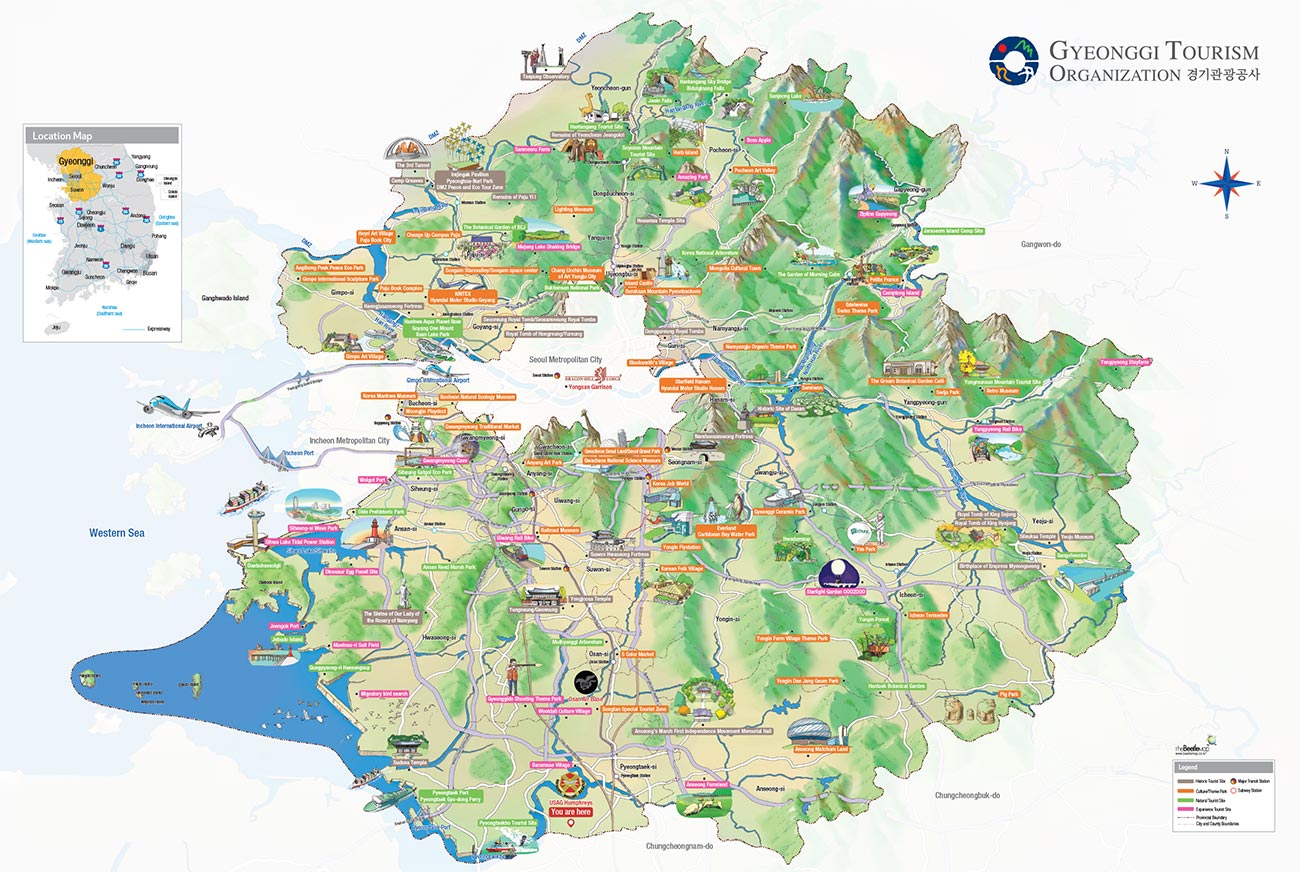 The most charming regions in Korea where the past, present, and future come together.
Let’s explore these fascinating places.

Geographically, Gyeonggi-do surrounds Seoul, the capital city of the Republic of Korea and is the center and the economic hub of the country. With two airports and two ports, it allows easy access to any city in Northeast Asia within two hours. Gyeonggi-do is where the tour in Korea begins. From prehistoric times through Baekje, Goryeo and Joseon Dynasties, which had maintained the royal road through the region, Korea’s leading industries like IT, auto industry and tourism have flourished here.

‘Gyeonggi’ means ‘outer land of kingdom’s capital’ and serves to protect the royal palace. Since 1018 (Goryeo Dynasty) when the name was first used, the province has long been specially treated as the area guarding the capital of the kingdom. It is why you can find Suwon Hwaseong Fortress and the Royal Tombs of the Joseon Dynasty here. Suwon Hwaseong, the masterpiece of the Joseon Dynasty, is one of the finest Asian fortresses. It was scientifically designed based on both Asian and Western military science theories and the oriental philology of ‘filial piety.’ Passing through the downtown area of Suwon, the fortress is one of the most popular tourist destinations; it works off the charm of Gyeonggi-do where tradition and modernity are balanced. Registered recently as a World Heritage by UNESCO, the Royal Tombs of the Joseon Dynasty are attracting worldwide attention. It’s very rare in the world that a single dynasty has existed for 519 years and it’s extraordinarily hard to maintain the tombs of kings and queens in that excellent state. UNESCO, impressed with their artistic and historic value, came to designate all of the 40 tombs as world heritages. 31 out of the 40 tombs lie in Gyeonggi-do. Based on these valuable cultural heritages, the province has become the center of Hallyu, or the Korean Wave.

Dae Jang Geum, an advance guard for Hallyu dramas that have been highly popular in Japan, China, Middle East and Southeast Asian Nations, was shot at Hwaseong Fortress in Suwon and Korean Folk Village in Yongin. Invested in and managed by MBC, one of the major broadcasting stations in Korea, the Yongin MBC Dramia is bustling with a lot of foreign tourists since it served as the production studio of Dae Jang Geum, The Moon That Embraces the Sun and The Great Queen Seondeok. Indeed, Gentleman, the music video of Psy, which was a massive big global hit in 2012, was shot at the Onemount in Goyang, and some episodes of Running Man of SBS that are popular in Southeast Asian Nations were shot at the Onemount and the Petite France in Gapyeong.

Gyeonggi-do consists of 31 cities and counties, which enclose Seoul like a doughnut. They are just like 31 varied theme parks in and of themselves, attracting tourists all the year round with unique and fascinating entertainment delights. With massive theme parks, beautiful natural parks and diverse experiential facilities, the province offers world-class festivals as well as charming local fairs. It has the Korean tourism resources and conveniences for city tours, as well. 31 themes and fascinating tourist attractions in 31 areas! War and peace, environment and technology, nature and art – all these themes are available here in Gyeonggi-do, the hub of Korea’s tourism realm.

Everland was ranked as one of the four major theme parks by Forbes in 2006. Located in Gyeonggi-do, it is one of the most impressive tourist attractions in Korea with nine million visitors annually. Apart from Everland there are many exciting theme parks in the province such as Gwacheon Seoul Land, Woongjin Placydoci and Onemount. The Korean Folk Village, which features Giwajip (mansions of Yangban, aristocrats in the Joseon Dynasty) as well as Chogajip (rice straw-thatched house), is one of the world-class tourist destinations where you can experience a variety of Korean traditions and cultures. For foreign tourists, in particular, it is a must-see destination since Nongak (a rural form of Korean percussive music), Jultagi (tight-rope walking) and Korean traditional weddings are performed all the year round. Woongjin Playdoci, opened recently in 2009, is fitted out with the world’s 12th indoor ski slope and offers advanced technology and services.

One and Only Place on Earth; DMZ

The DMZ (De-Militarized Zone) is a natural tourist attraction. The world’s only active strip of division, the DMZ has recently come to be regarded as a great ecological tourist spot with exquisite natural resources. Many people including children and world celebrities have visited the DMZ, which has been cut off from the outside world for half a century, to discover the importance of nature and to hear a true message of peace.